Today, the tendency to reduce the use of prophylactic antibiotic supplements in the diet of animals around the world is considered. However, supplementation with antibiotics reduces the incidence of some diseases, increases growth rate, and improves the effect of diet on animal production.

Currently, more evidence suggests that long-term exposure and nonspecific exposure to antibiotics lead to bacterial resistance with obvious effects on the future efficacy of these vital drugs. Restricted or banned. This has become a new necessity to find alternative ways to preserve the function of animals and protect them against disease.

In addition, the use of antibiotics in the treatment of animals is also affected; therefore, it is necessary for veterinarians and other legislators to change their strategy and move away from active treatment approaches to reach a preventive strategy, animals. Keep healthy to subsequently reduce the need for antibiotics.

There is a constant need to use specific micronutrients to help producers achieve both the goal of reducing antimicrobials while maintaining health and animal production. An area that has never been considered is the animal immune system. 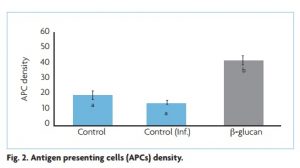 Several diseases in their pathogenesis have a debilitating effect on the immune system. Some strategies, such as intensive vaccination programs that aim to stay healthy, are costly. Young animals that are safe but weak should not be forgotten.

In addition, eliminating safety gaps is critical when maternal immunity is lost and the safety of the newborn chick is not yet complete. Providing conditions for an immune response through dietary supplements can improve animal health at the lowest possible cost. It may even be necessary to boost immunity without exposure to disease. By supporting the immune system, there is the potential to reduce all the negative effects. Definitely, always adjusting the immune system is associated with the possibility of serious energy costs and loss of conversion factor.

The goal is to target species or ages that are in real need of support so that active micronutrients can be regulated and dosed to prevent excessive amounts. 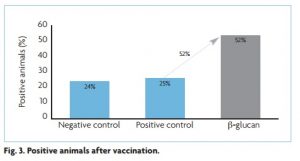 Regulation of immunity and β-glucans

Natural safety regulators are of interest in animal products. β-Glucans are known as immune regulators and have been expressed as stimulants of specific and nonspecific immune responses that enhance resistance to infections and diseases. Several immune cells in animals, such as antigen-expressing cells such as macrophages and dendritic cells, can detect the carbohydrate structures of β- (3,1) glucans with specific receptors on their surface (such as the dectin-1 receptor).

In response to binding to β- (3,1) glucan, immune cells become more active in learning, killing, and digesting invasive pathogens, and cascades begin to transmit a message that stimulates the absorption, formation, and activation of other cells. Will be safety.

Linear β-glucans are derived from the plant Euglena gracilis, which stores a molecule that stores polysaccharides in its cytoplasm, and β-glucans are known for their immune-regulating properties. It is commercially added to the diets of meat-producing animals to improve performance and disease resistance by boosting immunity. For immunomodulatory effects, the molecule must be taken up by immune cells.

A study was performed to investigate whether plant β- (3,1) glucan is uptake by immune cells or induces other pathways of immune message transmission. Mice macrophages were collected from the intestine and spleen and distributed in slide sections (105 105 105 cells per section).

The three wells were incubated with fluorescein isothiocyanate (FITC) bound to β- (3,1) glucan (5 g / ml) for 2 hours. Unbound components were washed and cells were incubated for another 72 hours, followed by macrophage (CD11b) and nucleation (4,6-diamidino-2-phenylindole, DAPI) labeling. The cells were imaged using focal microscopy. 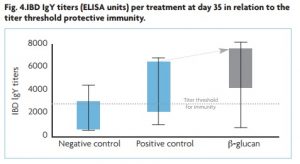 Help the animal to resist disease

Coccidiosis is the most commonly diagnosed disease and consequently the most important economic disease in the poultry industry. It is caused by leading protozoan parasites in poultry intestines.

Natural immune stimulants such as β-glucans are a suitable alternative and supportive of anti-coccidiosis programs. Therefore, a special experiment was performed to investigate the effects of dietary β-glucan supplementation (Aleta, Kemin) on lesions and intestinal immunity in broilers exposed to coccidiosis. The experiment lasted 20 days and included 240 birds divided into 3 treatment groups with 8 replications in treatment. The experimental design assigned to the recommended dose of β- (3,1) glucans is shown in Table 1.

β- (3,1) glucan improves the utilization and activation of immune cells in intestinal tissue because plant β-glucan showed an increase in the amount of APCs, which explains the reduction of intestinal lesions.

One of the most common viral diseases in chickens is bursal infectious disease (IBD), which is caused by the IBD virus, which destroys B lymphocytes and leads to immunosuppression and ultimately poor function.

Vaccination is the most important part in the prevention and control of IBD. An effective vaccine improves the immune system of animals, which leads to the production of antibodies against the invasive virus.

A new way to improve the effectiveness of the vaccine is to use safety supplements. The aim of this experiment was to investigate whether the use of β- (3,1) glucans (Aleta) in the diet could increase the efficacy of Gamburo vaccination in poultry, which was studied in broilers. 96 Ross 308 broilers were divided into three treatment groups: negative control group, positive control group and plant β-glucan group.

Broilers were vaccinated orally with free live-dried Gumboro vaccine on day 18. To evaluate the effectiveness of the vaccine, blood samples were taken on days 18 and 35 to measure the antibody titer (IgY) against IBD. During this experiment, in the plant β-glucan group, we observed 16% more specific IBD titers (IgY) and 52% more seroconvert birds compared to the vaccinated group without supplementation (positive control).

Adjusting and supporting immunity can be a useful way to reduce the need for antimicrobial drugs. Strengthening the immune system with β-glucan supplements showed that not only did the number of animals responding to the vaccine double, but those responding had higher antibody titers.